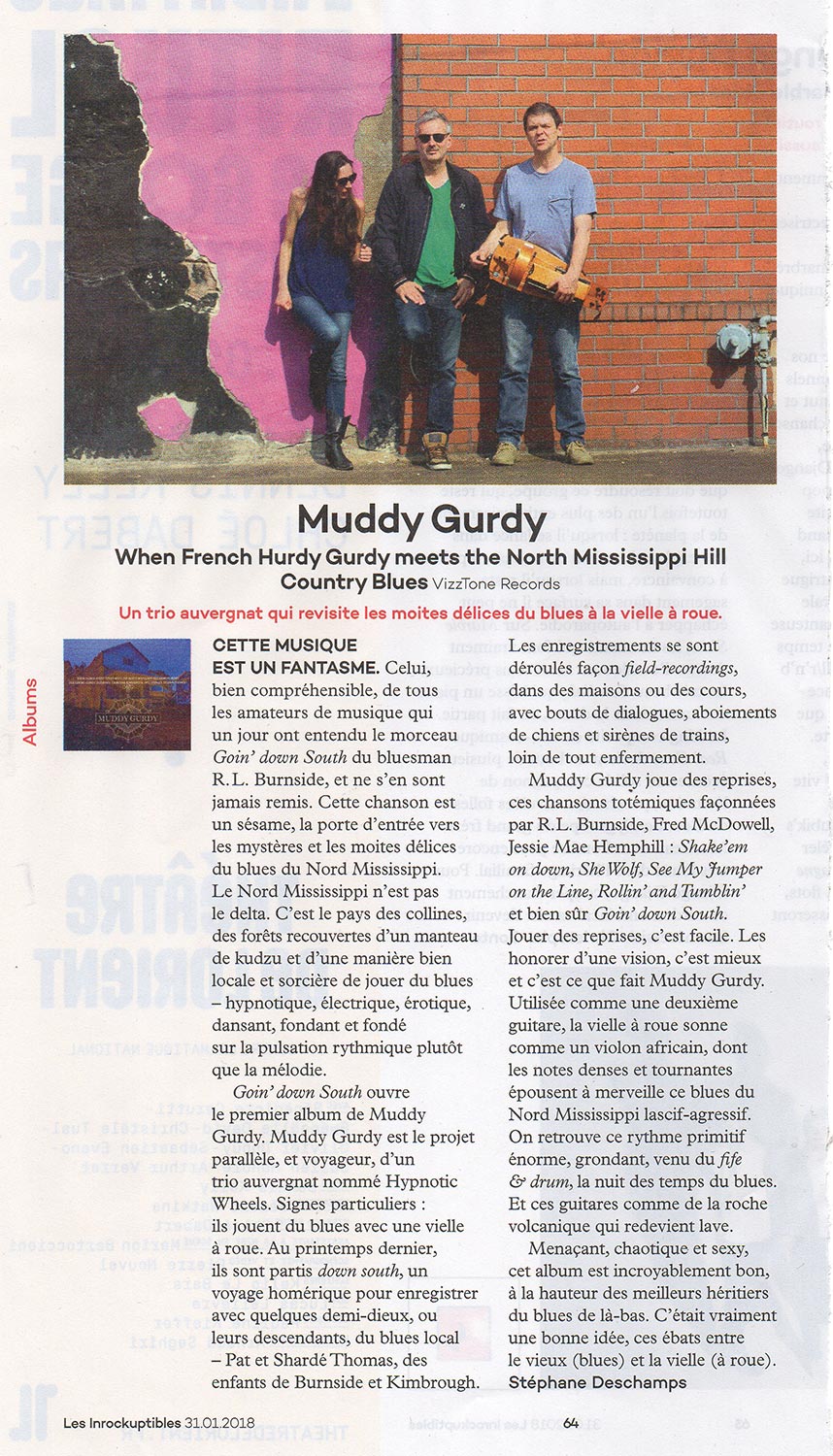 MUDDY GURDY PRESS REVIEW / INROCKUPTIBLES (France) – January 31st 2018
When French Hurdy Gurdy Meets the North Mississippi Hill Country Blues
This music is a fantasy. That, understandably, of all the music lovers who one day heard the song Goin Down South by bluesman RL Burnside and never recovered. This song is an ‘open sesame”, the gateway to the mysteries and sweet delights of North Mississippi blues. North Mississippi is not the delta. It is the land of hills, forests covered with a Kudzu mantle and a very local and arcane way to play the blues – hypnotic, electric, erotic, dancing, melting and based on the rhythmic beat rather than the melody.
Goin ‘Down South opens the first album of Muddy Gurdy. Muddy Gurdy is the parallel and traveling project of a French trio called Hypnotic Wheels, Of note: they play blues with a ”vielle à roue” – a hurdy-gurdy (Literal translation: Old Wheel). Last spring, they went down south, a Homeric voyage to record with some demi-gods, or their descendants, of the local blues – Pat and Shardé Thomas, children of Burnside and Kimbrough. The recordings were made in field-recording style, in houses or courtyards, with bits of dialogue, barking dogs and train sirens, far from any confinement.
Muddy Gurdy plays covers, these totemic songs shaped by RL Burnside, Fred McDowell, Jessie Mae Hemphill: Shake em on down, She Wolf, See My Jumper on the Line, Rollin’ and Tumblin’, and of course, Goin ‘down South. Playing covers is easy. Honoring them with a vision is better and that’s what Muddy Gurdy does. Used as a second guitar, the hurdy gurdy sounds like an African violin, with dense, rotating notes marrying this lascivious-aggressive North Mississippi blues. We find this huge, rumbling primitive rhythm, coming from fife & drum, the night of the blues. And these guitars like volcanic rock that becomes lava again.
Threatening, chaotic and sexy, this album is incredibly good, at the high level of the best heirs of the blues from there. It was really a good idea, these frolics between the old (blues) and the old (wheel.)
By Stephane Deschamps